The Worst Foods For Acne 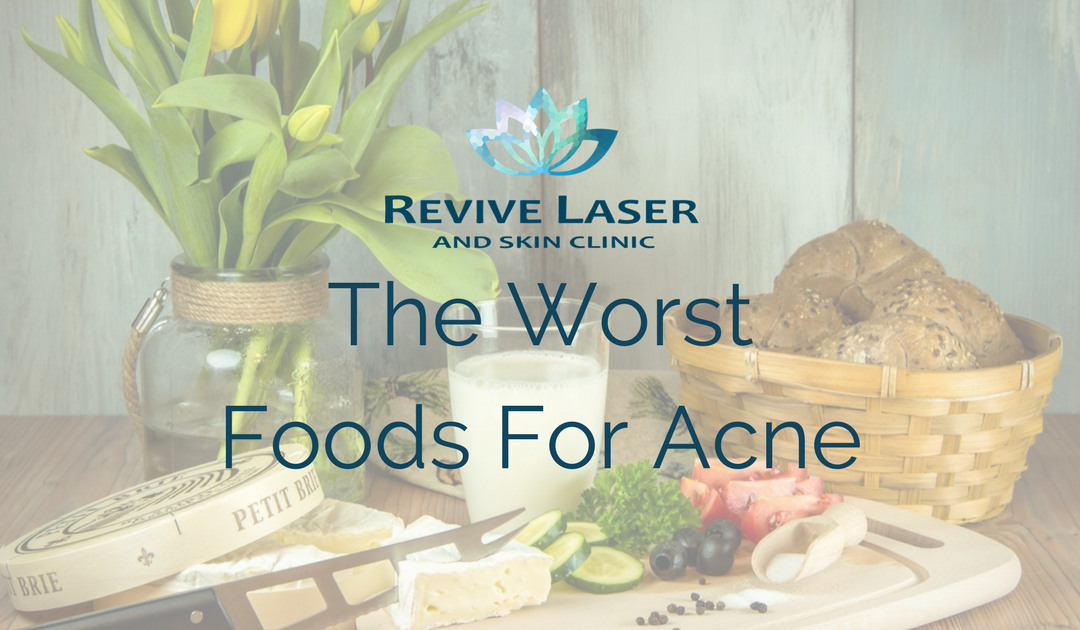 So, you’re doing everything right. You’re washing your face twice a day, removing all your makeup, not wearing that heavy foundation anymore. But you’re still getting breakouts. Before resorting to harmful medications like Accutane, think, are you eating the worst foods for acne? Let’s try adjusting your diet first!

The Skin is the body’s largest organ

When there is inflammation inside the body (meaning the body is unhappy), one of the first places to show it is the skin. Other signs can include headaches, other skin problems like Eczema or Psoriasis, as well as many different digestive issues.

Our recommendation is to try elimination diets to see if there are any dietary triggers for your acne. This can be done under the expert guidance of a nutritionist or naturopath, or you can try saving some money and begin experimenting with the most common trigger foods yourself.

The best way to do an elimination diet is to completely eliminate these foods completely for a few weeks. No cheating. If you cheat, you need to start the experiment all over again. You can then slowly begin introducing them back into your diet one by one, several days apart. If your skin clears up during the elimination period then begins to worsen after bringing back one of these foods (or all!), you will have your answer.

I know, this sounds awful and you’re probably grumbling already. Who doesn’t love cheese? But this will end up being a struggle of priorities. Which is more important to you, clear skin, or the cheese on your pizza?

The reason dairy contributes to a whole host of annoying problems is the hormones. An average glass of milk can contain up to 60 different hormones (it does come from a recently pregnant cow), which in some people, can throw their own hormones off balance and cause all sorts of issues with the body, like acne.

Typically, dairy from goats isn’t as inflammatory as cow’s milk, so cut out all dairy at first and try adding back cheese like goat cheese and feta. Some yogurts are also not an issue even for those with dairy intolerances.

So what can you eat? These days, going dairy-free is becoming much easier as it becomes more common. There are now a lot of great alternatives available. Try coconut, almond or cashew milk, ice cream, yogurt, and coffee creams. Most are fortified with the same amounts of calcium and Vitamin D you would find in cow’s milk and they taste so good, you won’t even miss the old stuff. Just watch out for the sugar content, which brings us to the next elimination food…

Sugar (and other high glycemic foods)

Besides the obvious sources of sugar like candy and alcohol, foods that are high on the glycemic index (raise blood sugar levels) like white bread, pasta, and cereal, potatoes, etc. can also raise insulin in the body and mess with hormone balances. This can change the body’s oil production in the skin, which leads to breakouts.

Replace white potatoes with yams and white starches with foods made from brown rice, whole grains, and quinoa.

There is good news for chocolate lovers though, in the past chocolate was thought to cause acne, but it turns out it is more likely the sugar in the chocolate. Try dark (80%) cocoa chocolate with no (or little) sugar added, which is also an antioxidant!

Contact us to learn more about our vast skincare treatments like IPL Photofacials, Morpheus8 microneedling, and of course laser hair removal to remove all unwanted hair.

Talk to the experts about your skin. Our complimentary consultations go deep beneath the surface and figure out exactly what your skin needs to improve its health and rejuvenation.
Book Now!